Issue 48, Volume 8.6 of Supernova is a vibrant mix of striking features and loads of reader participation. Our readers raise their voices in this last issue of Volume 8 by sharing their thoughts in letters, showcasing their crafting talents, putting forth their opinions on topical matters and playing the part in cosplay, which can be seen in the KidsCon report in the Chill zone. In this issue, we take a look at some major human accomplishments, including the anniversary of the moon landing, the anniversary of the fall of the Berlin Wall and, more recently, South Africa’s memorable Rugby World Cup victory. This theme is prevalent throughout: the rare appearance of a Supernova space man (or woman, in this case) on the cover, The Photo Feed, which showcases amazing winning photographs of the Wildlife Photographer of the Year competition; The Pro-files, which introduces PJ Prinsloo, a diving instructor at the top of his game; Life, the Universe and Everything, which pays tribute to South African music legends; and Get Active, which celebrates our rugby victory. Tech Talk once again informs on the latest tech marvel, while we interview the Berlin Wall in Ask It, which is a reminder of human resilience during a dark time in history.

Ant’s Eco Adventures takes a fresh angle, by providing an informative and handy guide to the Kruger Park. The New Space Journey is a feature, written by former NASA employee Jim Adams, which remembers the moon landing fifty years ago, but also informs of the latest developments in the Artemis space programme. Older readers will benefit from this feature, but it’s a great read for any space lover. In addition, The Chatroom raises an interesting question about the space race and the costs involved. Our readers avidly share their opinions on the matter. We introduce a new series feature in this issue, called Making sense…, this is an educational, but visually enticing, read about our senses. Each feature covers a sense. We kick off our series with smell. When nature takes over explores weird and wonderful places in the world where nature has found its way after we had left our footprints, sometimes with devastating effects (i.e. Chernobyl in Pripyat). As usual, there are fun and engaging activities available for all ages, as well as our regular comics at the end of the issue. 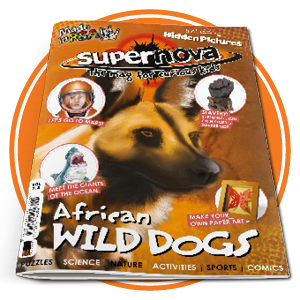 Supernova, the mag for curious kids is an educational magazine, targeted at children between the ages of 9 and 14. This bi-monthly publication aims to make children aware of issues which affect them, their community and the environment, by giving them tools and inspiration to become active and responsible world citizens.

You have free postage. Get free courier shipping for any orders over R130.00
0%